My wife and I arrived at the Federal Building an hour before the closing arguments began at 10am, but by then we were already number 30 in a line waiting to get into the overflow room. We were told the overflow room was full and only press could reserve passes. By 10am, the line to get in looked to be 150 people at least – and luckily they had opened an additional two overflow rooms.

So we had plenty of time while standing in line to talk to people around us.  Though we were mostly too full of nerves to talk, we did meet one really nice guy behind us in line and talked about the trial, and about how my wife and I wish we could just invite the people who don’t want us to marry over for cocktails so we could really talk to each other and see how we are alike and how we are different. He told us he’d also be honored to have us over to visit him and his wife.

There’s obviously much of record there and much to say about what Olson and Cooper and Walker said during the trial — and there’ll be much written elsewhere, now and for a long while to come — but to me the most amazing thing happened after the trial so I want to write this now.

Thanks to Marriage Equality USA’s Molly Mckay, we got into the press conference right after the trial. We immediately met the smiling man we had shared the “nr. 30” spot in line with before the trial, and he gave us a big hug.  I then asked him what his interest was in being there — “I work at the California Family Council and with Ron Prentice at Protect Marriage,” he said.  To my other side was Kate Kendell, tireless and amazing director of NCLR, and to this side was “the enemy.” And we were already friends.  It was an amazing and bizarre moment. 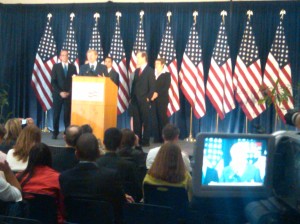 Olson: "Our clients - they're not plaintiffs, they're human beings who stand for everyone"

As I listened to “his side” talk at the press conference about the wrongs people like us were doing to people like my daughter, I kept receiving pictures on my cell phone of my daughter, who was at that moment twirling with a friend in the playground in the brilliant light. And he and my wife and I kept talking about our families, and re-extended the invitations to visit. We shared pictures of beautiful family. I thought about the truly thin line that separates “our side” from “their side” and what in the end we are really fighting for.  I felt like the future is a bright light toward which we run, and one day none of this will matter anymore.  We’ll be beyond.

When shall we learn what should be clear as day

We cannot choose what we are free to love

One thought on “Prop 8 Trial Closing Arguments: What really separates you from me?”