And yet it moves!

Had a quick conversation with Ellen via Twitter this morning about telescopes, since she’s shopping for one with her 7-year-old. Leaving aside all the tangents I want to travel right now, like about how I cried the first time I saw the Moon in a telescope, it occurs to me that Galileo’s telescope was one of the most disruptive technologies ever created. (And we think the Internet changed things!)

He created this thing — the telescope — and then observed, carefully, the spots on the sun. And then he knew from what he saw that the Earth indeed moves — and is not flat.

That caused such a ruckus that he was forced to recant it lest the Heavens fall straight out of the sky. He did recant, and yet was still deemed so dangerous that he remained under house-arrest till his death. (And it took us centuries to pardon him, by the way.)

And so we created this thing — the printing press (thanks @chadmaglaque), the Internet, mobile devices — and we observe. And we let people know. Your notions of the news, of human rights, of relationships and of family and of marriage are changing. And it causes a ruckus. And one day, maybe centuries from now, truth wins. 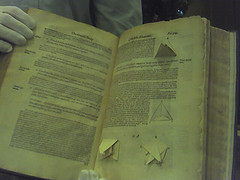 I was happy to attend Edward Tufte’s excellent class Presenting Data and Information on December 6 in San Francisco. The New York Times calls him “The Leonardo da Vinci of data.” Says Wired about the course: “One visionary day….the insights of this class lead to new levels of understanding both for creators and viewers of visual displays.”

One thing I loved was his notion that you know you have a good design when you’ve got people all having different experiences because of it – like it’s the cacaphony that’s the success, instead of passive silence. To him, the sign of a good data graphic is when everyone is thinking different things, asking questions and interacting, evoking different experiences and cognitive style. Saying things like “What’s missing is…” Once again this makes me feel like the diversity itself is the key, and if you let people “be who they are” by whatever you do, everyone wins.

I also loved that he brought Galileo to the mix, and lingered on the importance of Galileo’s visual evidence of the sun spots – which ultimated rocked our world in the most profound way. Before Galileo: Wordy Authority; After Galileo: Evidence. Tufte makes the analogy here to the importance of good visual design as evidence itself. For the first time, the earth moves — with visible certainty. Tufte also passed around an original print of a 1570s book (I didn’t catch which one, because I was dumbly fumbling with my camera) that you could say demonstrates early 3D prototyping. So how far have we really come in several centuries?

Below are some of the other highlights I got out of it.

On the Human Eye-Brain System

He spent some time dwelling on the human eye-brain system while lamenting what we have done to “dumb-down” the vastly superior capabilities of this system. “We can process tons of information visually, so how come our graphics look like cartoons?”

On Email and Newspapers

And then he did.