Facebook has been rolling out its yet-another-“why hello there, new privacy” settings to you and to me in various alerts and yellow dialog boxes over the last week, providing me the chance to once again wonder whether I like this constant opportunity to reappraise what I share with whom and when.

As often occurs to me when I’m thinking of gardens and walls like these, I think of Logan’s Run. As the Old Man says:

You know, they’ve each got three names. Yes. The naming of cats is a difficult matter, It’s just not one of your holiday games; You may think at first that I am mad as a hatter, When I tell you that each cat’s got three different names. See, they got their ordinary name and then they got their fancy name. And that makes two names, doesn’t it? And now it’s got a third name. Can either of you two guess what that third name is? Come on! Above and beyond, there’s one name that’s left over, and this is the name you never will guess. The name that no human research can discover, but the cat itself knows, and never will confess.

(Abridged from The Naming of Cats by T.S. Eliot)

It’s true. Like everybody, I have many faces. The Moya Watson you read here is usually carefully — sometimes even thoughtfully — crafted. I guess you could say this is my “fancy name.” (Though if you look to my earlier writings, they’re a lot more internal-monologue — imported from the nascent days of Blogger.)

Whereas, the moyalynne on Twitter is probably my “ordinary name.” This is my every-day “I’d rather be skiing than going to work” or “My daughter just said the most amazing thing” or “I just spilled my coffee”-silverware — and it’s published, for everyone, to see. It’s easy. Just like that.

AND THEN there’s Facebook. The Moya Watson on Facebook — like many — opens up a bit more in moments and images of herself and her family (usually ironically finding more nurture for this openness within the walled gardens of this closed environment). But she does this with people she knows, whereas with Twitter, she gets to meet people she never before knew.

Well, it was a somewhat easy distinction. Facebook, in starting to poke holes in that T.S.-Eliot-like interface, is drawing into a bigger Web of confusion. And the more we can tweak more of exactly who sees what and where (if we can fathom the Privacy Settings UI), the more the “Moya Watson of Facebook” finds she becomes an enigma.

It’s constantly strange to me when the freedom to just be who you are increases exponentially with more layers of protection. While no “social network” yet exists for the me inside my head, the name only I know and shall never confess, if it escaped it would probably — and then in that act itself — resemble little of me anyway.

At the present, I simply close those yellow alert boxes and find it’s too much worry trying to remain consistent and definitely too alienating for my psyche to have “the ability to control who sees each individual piece of content you create or upload.”  I’m finding I worry less and less about when all these people converge, and simply just exist. Maybe even (gasp) not post.  It’s the  “Look at your palm! The Crystal! It’s clear!” moment.

Logan, look! Look at your palm. The crystal. It’s clear … We’re free! It must be

Seconds away from writing a serious post on the Web 2.0 Summit last week in San Francisco, my head aches, I have a meeting in way less than an hour and a different project or three to manage, several other writing assignments, and I decide what’s important for the moment is to instead cover the wild whimsical wacky wardrobe world that was this year’s Web 2.0 Summit. Why do I feel compelled to do this? I have no idea. (If I don’t get that serious post up by the end of today, I’m probably abducted by aliens). And yet here I go.

First and foremost in any wardrobe wrap has to be a gigantic shout out to Wordnik’s smart and sassy CEO and co-founder Erin McKean who pitched a great high-order bit on the excellent Wordnik as well as their newly launched API for the English Language, ALL in her hand-made Tetris dress.

Then there’s John Battelle, who always looks particularly natty in his blue jeans, dangling this teaser of a surprise Google spot and entreating us to guess who it is based on the shoes alone. To which my handy Twitter-mate @UberShoeDiva (who does indeed have the UberShoes) responded thusly: “What is he *wearing* on his feet?? Those can’t be shoes. I hope not. I really hope those are just some edgy socks.”
(Those by the way are Sergey Brin’s Vibram Five Fingers )

And actually I’d have to say John Battelle came in tied for first place for best jeans this year – and you’ll just have to scroll through this really excellent session on Humans as Sensors to see why (catch Mobilizy’s Markus Tripp in his excellent jeans – or you can just get a hint of them here). 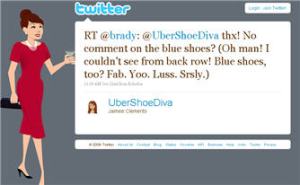 Brady and UberShoeDiva (AKA Jaimee Clements) cut it up

In the same video, know that no wardrobe wrap would ever be complete without a mention of @brady’s gorgeous purple shirt, green plaid pants, and blue shoes. Once again this goes not unnoticed by UberShoeDiva.

One out-of-character note for himself and for the summit was Mr. Tim O’Reilly — who was constantly seen sporting a SUIT, making you wonder if he or we all had been abducted by aliens.

Contrast this with the baggy-jeaned teens – at least the one who uses Blackle instead of Google (to save energy) – from the excellent What Do Teens Want? panel – and you get an idea of why I really love the Web 2.0 Summit among all other conferences.

And I simply cannot ever forget @lwaldal’s commentary of the “Zappos guys:” “I’m sitting in the 3rd row and pretty sure that josh, liam, maynard and john onstage right now are all wearing the same shoes.” This observation even made Industry-Standard fame.

And finally, though what it has to do with wardrobe or what wardrobe has to do with anything I’m not sure, thanks to @lwaldal for pointing out “a chandelier for balloon boy” in this shot of how the Ballroom was decked out:

"A Chandelier for Balloon Boy" - @lwaldal

The conference was jam-packed and a lot of fun but tiring, so this shot perked me up just when I needed it.

And now with that off my chest…

My series on the Web 2.0 Expo 2009 is complete and all published over on the SAP Community Network. I point to each piece here and invite you to check out my favorite quotes and highlights below:

“Web 2.0 was in its infancy 5 years ago,” said Tim O’Reilly in his opening keynote at the recent Web 2.0 Expo in San Francisco. What has Web 2.0 grown into since its inception, and how has it gotten there? Is the Web getting any smarter?

Part 1: Sense of self