Much has been written and discussed since November 4, 2008 in the attempt to sort out why our efforts in California against Proposition 8 failed to actually beat the proposition. We should of course study hard and learn from mistakes, and above all move forward with this momentum. But what continues to impress me the most is the collective spirit of giving — of all of your stories — that has taken place as a result of this profound effort. I devoted myself for an all-too-short time to the No On Prop 8 campaign (big thanks to my friend Calla Devlin for that opportunity), and for the record, I am honored to have been a part of it. I believe it has forever changed me in ways I’m not even fully aware of yet. Every one of you who played a part in sharing your stories during the campaign — you have affected me deeply. And you still do. 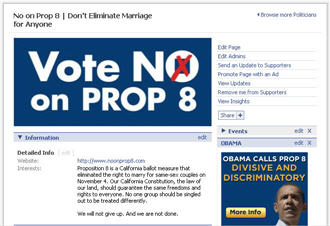 Anthony shared how he was a “recovered homophobe” — and how he overcame it. Eric twittered about being alone with a sign down in Los Angeles. A Mormon woman from California reached out, against the formal advice of her community, to say I cannot in mercy vote to destroy the legal protections they now enjoy. Entire families worked on the hard conversations, overcame fear, attended weddings, and wrote about it to others. People sold out the signs and rallied by the thousands. People of any persuasion stepped up for the right thing, to vote no on Prop 8. Steven, a straight man from Utah, stood by us faithfully in support. And every day, Abby sent us a personal dose of encouragement and cheer via Twitter. Those are just a few stories, off the top of my head, and are all YOU. T’was the season of personal giving — and it still is. 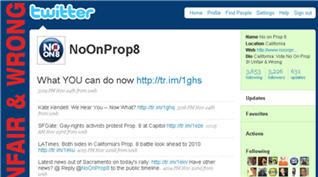 You continue to share your stories in person, on the streets thanks to Join the Impact, and on various social networks: over 172,000 of you on Facebook, 3,200 of you on Twitter, 4,500 on MySpace, and 300 on LinkedIn — which is not to mention the tens of thousands of views on a YouTube channel that rivaled Obama’s in popularity in the days leading up to the election (with — in a first for any political campaign in this country — YOU submitting stories for the official channel) – and the countless blogs and blog comments. I salute YOU.

That’s the real story here: YOU and who you ARE. If you haven’t already noticed, you’re making a big difference, continuing to reinforce that “the lines between what is a blog and what is a mainstream media site become less clear.” (People who work in the courts, by the way — they have the Internet, and they know how to use it.)

No On Prop 8 on LinkedIn

It is with that spirit that I’m impressed with the organizations involved in the campaign that are striving to bridge the gap between traditional and new media, with the ultimate goal of giving us all a place to be. Check out this page published by the NCLR yesterday:

No longer is it an official press release vs. a blog: it’s just you telling your story. Molly Tafoya recently shared this insight with me: the gift is not to tell people how to feel, but to help people talk about it. To help people share their stories: dare I say that this is the entire point?

“I’m not being radical when I kiss you. I don’t love you to make a point. It’s the hollow of my heart that cries when I miss you.”

“Love is stronger than any words anyway” (Catie Curtis). Find a channel — any channel — but find a channel and, with your words, your pictures, your videos — share about who you are. Because in the end, the most radical thing to do is just to be — who you are.

On the day before the 30th anniversary of Harvey Milk’s death, I can’t say it a better way than this:

PS: I leave you with one more channel:
http://change.gov/page/s/yourstory