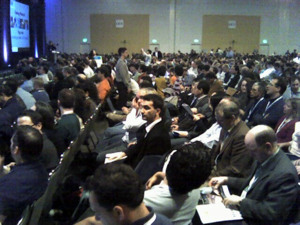 In several places, the Web 2.0 Expo< at Moscone West (April 15-18, San Francisco) blurred the line between the ethereal online community and actual communities of the world in which we live:

See Shuba’s report, reprinted on watchyourmouth, for a description of what happened next:

Right after the keynote, there was a Launch Pad session where 3 new start-ups launched their product officially in front of the audience. One of the products was a new search engine that can be used to search for people: http://www.spock.com

The founder and CEO Jay Bhatti made a very compelling pitch that had me raring to give the site a whirl until he stuck his foot in his mouth. The first search he demonstrated for the audience was for “bloggers”. For the next search, he said he wanted to make it more interesting, and asked the audience (mixed audience, 16,000+ mostly tech. crowd) whether they would like to search for Swimsuit illustrated models or for Victoria’s secret models!! Folks in the front voted for VS it seems, so he went ahead and used his search engine to pull up Victoria’s Secret models on the multiple big screens for the crowd. The women standing next to me were disgusted, and walked out literally calling him an idiot.

The point: All representations of results in the demo were men (all geeky techie bloggers and the like) UNTIL he pulled that punch. I had already been perceiving a gender imbalance at the conference and in the keynote audience. I had also been in some disarray by the time I arrived at the Expo. Community was on my mind.

Earlier that morning, after dropping my daughter off at school, I had walked through the Tenderloin (on Golden Gate Avenue – such a promising name) towards Moscone West. During that walk through part of what I consider my community, I stepped over and around sleeping or sick people, jumped over rivers of urine, was offered drugs, asked for drugs, and surrounded by clouds of pot, and felt simultaneously ashamed and humiliated that with all of our collective resources, this is the best community some of us ever get. And these are familiar feelings to many of us.

What I didn’t expect was that my odyssey of community-related feeling would continue throughout my conference attendance at the Web 2.0 Expo, and I didn’t predict that I would wind up feeling saddened as a woman in technology as a result of the Expo. 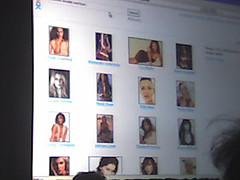 The women of Spock

As the Expo continued multiple-day run, I continued to note that women were vastly outnumbered by men (1:10 in most sessions – and of course there were exceptions – in both directions). Women were not represented in any of the Launch Pad companies, and were poorly represented as speakers. Kathy Sierra was supposed to be there – and is still not able to continue with her speaking engagements. Anyone who is familiar with her story will understand how poignantly related this is. Kathy was relegated by our Web 2.0 community back into the pre-1960s – or is it ahead into the 2010’s?

It might have seemed like a fleeting moment on stage and a “what’s the big deal” for many, but Jay Bhatti reinforced exactly that stereotype. Judging by Jay’s personal posse at Spock, the split in the blogosphere, and the defensiveness of some of the company’s response, I can only assume that Spock and its users will continue to reflect those same values as their community and their search results grow.

One interesting thing “Web 2.0” does offer is a measure of appearance anonymity. Ironically, Spock (and its blurred lines, in turn, between “people search” and “image search”) will serve to strip this away. Mr. Bhatti has indeed assimilated into the community – another by now with which I’m uncomfortably familiar – of (for lack of a better term) “frat boys online who rule the Web 2.0 capital.” Conversely, the women whose images Spock serves will not assimilate as easily – or at least anonymize. Or, perhaps the role to which models are relegated are assimilation enough for Spock.

Tim O’Reilly, for his part, has been even-handed in fielding the blogosphere and Spock itself, for their part, (was it the letters sent by Systers to their VCs?) has cleaned up their Web site of some of its trash, posted an apology (of sorts) to their About page, and continues to try to do (somewhat weak) damage control, the likes of “I’m sorry if we offended you…” A collection of committed people were instrumental in getting Spock to change their behavior – but probably not their minds. The demo (or some would say clever marketing ploy) achieved measures of success both for Spock and for reinforcing a particular image (or lack thereof) of women in technology.

On my way home that evening, I took Ellis Street this time to pick up my daughter. I walked past the long line of people waiting for a bed for the night at Glide Memorial. I wondered what difference any Web 2.0 was going to make for this offline community, while simultaneously feeling like the communities are nothing unless they serve the people who need them the most. My daughter is fortunate: She does not need it the most. But after that day’s regression in gender equality, I wondered.

Ultimately, today’s “search results” are oh-so-fleeting in the great scheme of things and many certainly already wonder what all the fuss is about. But true communities take a long time to build and involve – I believe – trust, compassion, safety, and common goals. In the end, I want these three things:

Spock will be long gone, but let’s hope this unfortunate incident helps Web 2.0 continue its trend towards helping the real communities in need in which we all live, so that the brightest future is ahead for all. 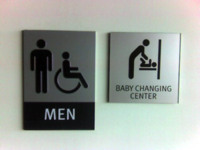 At least the men's room is evolved